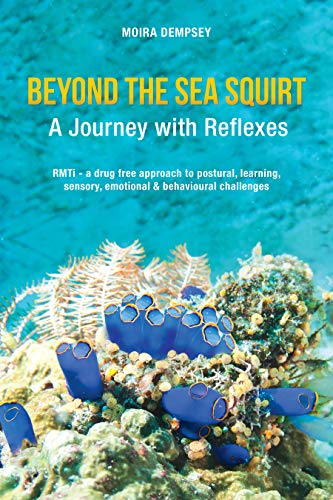 In January 2019, I offered to help Moira Dempsey do a first-pass at proofreading her new book, Beyond the Sea Squirt: A Journey with Reflexes. She accepted my offer, and I spent a very interesting month reading, re-reading. and offering suggestions when I noticed errors or strange wording. It was like taking an intense training course with one of the leading experts on the subject of neurodevelopment, primitive reflex integration and bodywork.

When I first met her in November, she told our group that she was going to call the book Beyond the Sea Squirt because of the way sea squirts live their rather strange lives:

“At the most fundamental level the only reason we have a brain is because we move. To develop the ability to feel and think actually requires movement as a first step. Sea squirts illustrate this well. Sea squirt larvae have a very rudimentary brain and nervous system. However, they have no mouth or way to feed. The larvae are able to move to the sea floor where they cement themselves head first and this is where they will stay. As the sea squirt will never move from that spot it no longer needs its brain and nervous system so it starts absorbing it. This absorption gives the larvae enough nutrients to be able to build the circulatory, digestive and reproductive systems necessary to sustain its existence.”

So the entire point of the book is to demonstrate how movement influences the efficiency of our brains. If you don’t move, you simply do not need a brain.

However, in January, Moira had come to the conclusion that she was going to simply call the book A Journey With Reflexes, with a chapter entitled “Beyond the Sea Squirt”. However, the more I read the book, the more I became convinced that the original title should be merged with the new title – so I suggested Beyond the Sea Squirt – A Journey with Reflexes – and Moira liked it! I think it’s a superb title.

The essence of this book was reminiscent of the scenes in the Disney film Wall.E, depicting obese people on floating beds finding out about dance for the first time – they have evolved to no longer require movement.

I was very excited to be amongst the first to read through this book – although it has changed a bit since I first saw it! I also contributed two RMTi anecdotes to the book, and the fact that it contains a story about helping my 102 year-old grandmother to walk and function again after a stroke is particularly touching.

The book is particularly accessible to parents, and gives dozens of examples of applications of Rhythmic Movement Training, from children struggling with literacy to motor skills issues, postural improvements, mental health, people who didn’t even realise that they were compensating for retained reflexes (me), and the elderly.

Moira’s writing style is so clear and natural, and she has told her personal story so openly and bravely.

It’s a must read for anyone interested in how they can use Rhythmic Movement Training to help postural, emotional, behavioural or learning challenges in an accessible way, as well as learning the characteristics of the various primitive reflexes.

Beyond the Sea Squirt: A Journey with Reflexes is available from Amazon for £15.27.