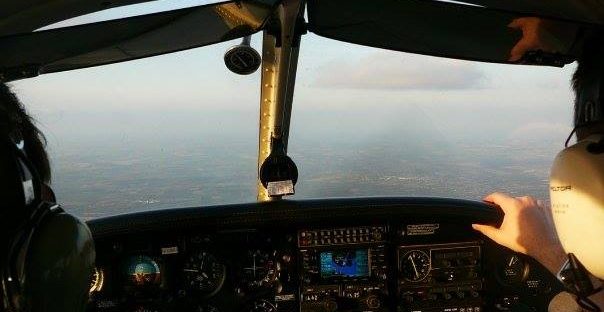 I started flying in 2003. I had decided to have a career change, and went to South Africa to do an intensive course over around six weeks, which was about a third of the price of flying in the UK, and with the promise of better weather, dramatic scenery and incredible wildlife (views of great white sharks swimming like guppies from the air).

Initially, I found it fairly easy to get to grips with what part of the plane did what. I’m from a long line of aviators. My great-uncle was shot down in the Battle of Britain, and his brother, took me on my first ever flight in a light aircraft when I was 10 years old. I remember thinking at the time that if he could do it, anyone could. Probably not really a fair assumption, in retrospect!

A great deal of skill is involved in flying. It’s true to say that people can get to be good at something by practising a lot, but looking back to my blog post Could you be struggling because you are compensating for baby reflexes?, it goes to show that with a little bit of reflex integration work, things can become effortless.

It is around four years ago that I started working to integrate my own reflexes – firstly using brushing, and latterly using RMTi movements and isometric pressures.

I had a revelation around six months ago, while working with an optometrist from Mississippi, during an RMTi course: I had been doing active RMTi movements for myself for a year or so, and yet a movement I’d done SO MANY times by myself (actively) made me suddenly tense up when she did the same movement passively for me. Not only that, but when I got up from the couch, I could not see! The entire room had gone blurry. Later that day, I realised that EVERYTHING was clearer, and it appears that my slight myopia in my left eye has evened up. Incredible!

I went to do a currency flight last week, which, for non-pilots, means that I needed to do a minimum of three take offs and landings. I pay to belong to a flying group and have shared access to a PA28 based at Blackbushe airport, but I hadn’t flown it since last summer, and was lacking in confidence. I chose to fly circuits, as I thought I’d be rusty as anything after almost a year that it would be hard work – this has always been the case in the past. I also chose to take my husband (an instructor) as a safety pilot, just in case.

To my great surprise, EVERYTHING was as near perfect as possible. If it had been an exam, I would have passed easily and been congratulated on my smooth landings, perfect speeds at all times, etc.

Let’s fly a circuit and see how un-integrated reflexes might affect a pilot, making the task far more demanding.

First of all, there’s radio work. This demands very rapid auditory processing. This is STILL not my strong point, because I’m left hemisphere dominant and left ear dominant – so I am not accessing the optimal ear for auditory processing. A more optimal profile for me would be left hemisphere dominant and right ear dominant. I manage, but there’s a bit of a delay and I often have to ask “Say again”.

Next, we taxy and line up on the runway. Using rudder pedals accurately requires a well integrated Asymmetrical Tonic Neck Reflex (ATNR), although I would say it’s easier to steer a plane than a car, because in a plane, steering is carried out by the feet.

A retained ATNR means there is still a connection between head movements and arms – so as the right arm moves, the head has to move too – nothing you can do about it. Having this reflex active in the system means that a person has problems crossing their midline because the connections in the corpus callosum are weak. This means a person will have problems understanding where left and right are.

On the take off roll, we need a well integrated Tonic Labyrinthine Reflex, in order not to feel motion sickness or disorientation, and an integrated Symmetrical Tonic Neck Reflex in order to glance down at the instrument panel and back to outside without feeling disoriented and to be able to switch from near to far vision and back again quickly without putting too much of a strain on the eyes. On take off, the main concern is gaining height at the right speed and rate of climb for the aircraft, so it’s important to be able to refer to instruments while keeping a good eye outside the aircraft as well.

To recap, the TLR helps a baby to adapt to the new gravitational conditions that exist after delivery. As the body lengthens and stretches when the neck bends backwards or forwards, proprioception is stimulated by the change in muscle tone, and the baby starts learning how to get into an upright position with balance and stability.

An active STNR often means that vision and hearing have not developed properly, as well as persistent poor eye-hand coordination. This reflex also plays a role in binocular vision and binaural hearing.

After take off, at 300ft above ground level, we do “after take-off checks” – brakes on and off, undercarriage up, power full, pitch set, mixture rich, fuel pump off, flaps up, landing lights off.

In order to turn onto the crosswind leg, the ATNR reflex comes into play again. The standard circuit direction is left, because the captain sits in the left-hand seat. But people an active ATNR tend to confuse left and right – not a good mix when in the circuit! Someone compensating for an ATNR will have to think really carefully about the direction of circuit traffic.

On crosswind, the plane is still climbing to circuit height, so the turn onto crosswind is usually a climbing turn to the left or right, which brings its own challenges. The Head Righting Reflexes come into play when banking the plane, as the head and eyes need to stay level with the horizon rather than the head being in alignment with the direction of the plane. If the Head Righting Reflex (a lifelong postural reflex) is not yet active, it can cause disorientation in turns – especially as the turns become steeper. This reflex allows the eyes and head to stay level with the horizon while the plane banks. Lack of HRR or an active TLR or STNR can cause motion sickness when flying (or on the sea/in a car).

On the downwind leg, the plane should have reached circuit height. This is a very busy leg, with the pilot needing to control speed and pitch in order to keep the plane flying straight and level, not gaining or losing any height. In addition, the pilot needs to carry out a series of “downwind checks” (brakes on and off, undercarriage down, mixture rich, reduce power to within the green arc, pitch set, check flaps, fuel pump on, hatches and harnesses secure, landing lights on). The pilot will then make a radio call “X-XX downwind”, and will then need to process and comply with a response from the radio, and respond to it, potentially repeating back information from the tower. If primitive reflexes are interfering, this can be a very challenging leg to fly. It is thought that spinal reflexes the Moro and the ATNR are responsible for auditory processing, so someone with an unintegrated system will get completely overwhelmed by the amount of tasks to complete and the information to process.

Turning onto base leg involves a descending turn. I tend to put one stage of flaps down at this point to help me descend. We control airspeed with attitude (using the elevator) and height using power (the throttle). Constant attention to speed and height of the plane is required. Once again, head righting reflex, TLR and ATNR come into play.

Turning onto final approach, we put flaps down as necessary (or not). This can give us quite a steep attitude down to the runway – or a very flat attitude with no flaps. I once landed into Calais with no flaps – not intentionally, but because I was flying a Cessna 182 and the flaps are motorised. For some reason, they didn’t work, which I discovered fairly early on, so had plenty of time to plan for a flapless landing (which is very easy in Calais, as the runway is 1,535m long).

To plan for a smooth landing, we have to judge whether we are established on the glide slope. In airports like my home base, Blackbushe, we have special lights called PAPI lights to guide us down – we are looking for two reds and two whites when we are descending accurately. However, on smaller airfields or farm strips, there is nothing like that, so we have to be able to judge speed, rate of descent and distance accurately by eye. This is extremely hard, because for up- or down-sloping runways, there is an optical illusion, which makes the runway look narrower, shorter, longer or wider.

On final approach, we need our TLR well integrated in order not to feel vertiginous. We also need our Fear Paralysis and Moro reflexes under control so we don’t freeze or panic with the runway approaching! In addition, approaching a runway tests our distance vision, and being able to glance back down at the instruments tests our close vision – more STNR.

Unless you’ve landed a plane, you won’t know quite how thrilling it is. But it can also be extremely challenging for an unintegrated system! When we are integrated, or unintegrated but well practised, we look to the end of the runway, fly down to it and try to stop it from landing. We hold off until the wheels touch down in a satisfying way.

When we are unintegrated, the rest of the circuit may not have gone to plan either, and the plane will be flying ahead of the pilot! When this happens, it’s difficult to land in a controlled manner, and the plane might bump down roughly.

“Any landing you can walk away from is a good landing”.

Flying light aircraft is seriously the best fun one can have with their clothes on – if you have integrated reflexes.

I would add that I’ve never tried flying in the buff.