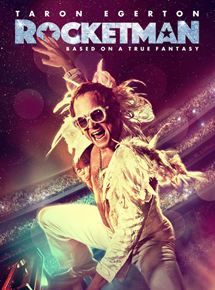 I have just been to see Rocketman, which is the story the transformation of shy child music prodigy, Reginald Dwight, to international superstar Elton John, and his story retold as part of group therapy in a rehabilitation clinic.

The film starts with Elton John marching into a group therapy meeting in his rehab clinic, dressed in full flamboyant gear, where he introduces himself and the reasons why he is there: alcoholism, addiction and bulimia.

We then see a five year-old Reginald Dwight at home with his emotionally abusive mother, uncaring father, and doting grandmother. He craves hugs, asking his father “When are you going to hug me?”. and receiving the absolutely heart-breaking reply “Don’t be so soft”.

His mother is dismissive of his musical talent, even when he is invited to audition for the Royal Academy of Music, so thank goodness that his grandmother stepped in to encourage him. Interestingly, his mother is happy to sponge off him once he’s a multi-millionaire.

As his fame rockets, he is used and abused by his narcissistic manager and lover of five years, John Reid, and enters a downward spiral of self destruction, despite the unconditional friendship of his song writer best friend, Bernie Taupin.

Throughout the film, his mother belittles him and blames him, even saying at one stage that she wishes she had never had children. His father is absent, having left when Reginald was in his early teens. Many of the scenes involving his parents reduced me to tears.

But then I realised something: both parents displayed the characteristics of a strong Babkin reflex and were completely incapable of bonding with their child, Given that unintegrated primitive reflexes are said to be hereditary, it would follow that Elton John also has inherited a Babkin reflex.

If attachment in infancy and childhood is poor, there is more likelihood of behavioural and emotional challenges in later life.

The Babkin reflex is responsible for bonding and attachment, and if retained it can cause addiction and eating disorders. In addition, the film mentions Elton’s shopping addiction.

The film is a technical masterpiece. It is also a lesson in hugging children to make them feel secure and develop a strong bond.

I am so happy that Elton John has found true love in life and is providing a secure and loving environment for his own children. Anyone watching this film will develop a soft spot for this talented superstar.

I just want to give him a massive hug.