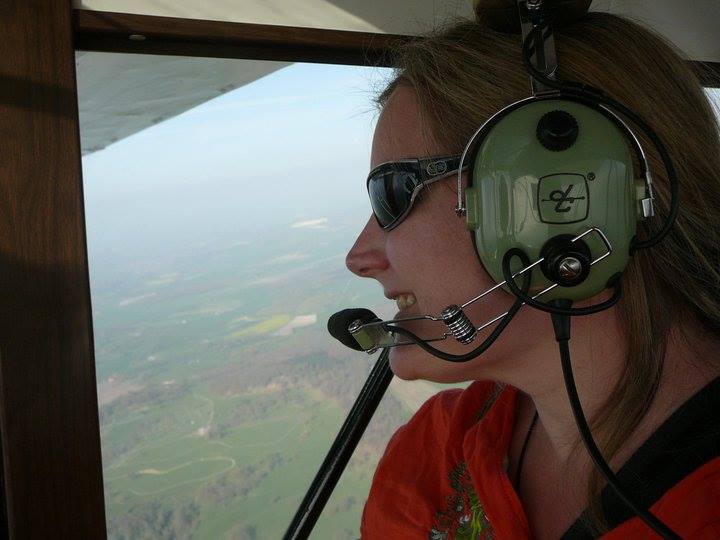 I keep using my own experiences as a private pilot to explain compensation to new clients – the concept of working extra hard as a result of retained primitive reflexes:

I was an average child who grew up in the 1970s. I played outdoors in all weathers, possibly a lot more than the children of today – skipping, French elastic, climbing frames, gymnastics, tree-climbing, getting muddy etc.

I was talking in full sentences when I was a year old, could read my name at 15 months and was reading when I was tiny (not sure how old). I remember being shocked that children had to read out loud when I started in Reception, though – I’d been reading in my head for ages before that. I didn’t really crawl – I went straight to walking at about 15 months. I can remember trying and failing to crawl – because I have a ridiculously early memory. I was also EXCESSIVELY shy. I found nursery school just too noisy and scary and remember hiding until I was picked up the ONE time that my mother left me at a big nursery school. I ended up going to a small playgroup at someone’s house, and have very fond memories of it, even now – even though I was only about three years old when I started going there.

Oh… also, nobody ever believes quite how early my memories go back. You won’t either, so I’m not going to tell you. But it’s not normal to remember anything from the first few months of life, and yet I do.

At school, I learnt to write easily. I wasn’t brilliant at maths, but not everyone is, right? My forte was always language and music. Well, I now think I may well be dyscalculaic, and I know that I have slower than average processing speed. I found times tables horrific to learn, and would always be last to finish in maths tests. I also found swimming front crawl particularly difficult, and found sitting comfortably still all day at school a challenge!

So, when I started training in primitive reflex integration, seven years ago, I was slightly shocked to discover that I am not “neurotypical”. Walking at 15 months, skipping crawling, being excessively shy, not being able to master that cross-lateral front crawl movement and being as atrocious at maths as me is not “normal” development. But who cares? I have been successful in life! I did really well in my previous career. I can also fly light aircraft, so surely my brain must be functioning reasonably well? And yes, it is…

But… when I went on a course on the effect of retained primitive reflexes on reading and writing a few years back, I discovered to my great surprise that I had not developed a head-righting reflex! This is an adult postural reflex, which should start to emerge at around 3 months of age, and its absence causes vestibular issues, and makes reading – in particular copying from a board – and maintaining attention particularly difficult.

To test, you get a person to sit look at an object a few metres away. You then move their shoulders from side to side, and watch what the head does. If the reflex is present (as it should be), the eyes will remain level with the horizon. If it has not emerged, the head will follow the rest of the body.

The trainer showed us some isometric pressures that can be applied to help develop the head-righting reflex, and, as if by magic, within minutes mine started to emerge! I remember hearing gasps from the other course participants.

Out of interest, I went flying in a two-seater plane a couple of weeks later and did a few steep turns to see whether anything had changed. Well… normally, steep turns had the effect of making me feel disoriented and I would always lose hundreds of feet, no matter how many times I practiced and no matter how much I concentrated. However, with a head-righting reflex in place, my eyes stayed on the horizon and I maintained height for the first time since I started flying in 2003! I no longer felt disoriented either.

I often see private pilots in the early stages of training saying that they feel sick, and receiving advice on motion sickness bands, ginger etc – I often wonder whether they have a head-righting reflex or whether I could help them with it.

I’ve also brought this adult postural reflex online in several children and adults that I’ve worked with – it’s always a thrill. If it doesn’t happen immediately, something else is blocking it, however.

The point of this post is to show that almost all of us are walking around compensating for difficulties that we are unaware of. To us, these difficulties are the norm, but they need not be! If a child is struggling with confidence, attention or the three Rs, it is well worth taking a look to see whether their reflex profile might be causing them to compensate.

So what can we do about it?

As a neuro-developmental therapist, I test for active baby reflexes, and help people to gradually mature these reflexes, using a combination of gentle foetal/newborn baby movements and pressures. Until you have experienced this for yourself, it is very hard to explain how it feels to suddenly have a challenge you have been used to for your entire life suddenly removed.

In my case, while my brain has indeed always allowed me to cope very well in the world and achieve things like learning to speak multiple foreign languages with ease, play the violin and fly light aircraft, things still could have been easier for me if I’d had integrated reflexes earlier.

Integrating primitive reflexes simply means that connections from the brainstem to higher levels of the brain will work more efficiently and not take the long way around all the time.

I now find that I can do things that I used to struggle with far more effortlessly – for example,

If you would like to find out how reflex integration might help you, please do get in touch – emma@move2connect.com.